[ This text was originally published in the summer of 2009 part of a series of blog-pieces that I wrote in 2009 and 2010 for the (now defunct) Media Art Platform of the Netherlands Media Art Institute (also defunct, thanks to the Dutch government's radical cuts in the funding for culture) ]

Okay, so I will blab one of our very first ideas for using the iPhone to present sonic creations in a radically different manner. We called it: ookoi's iRingg®. It is ultra-simple. It is particularly brilliant. And it makes essential use of the sometimes almost forgotten fact that the iPhone indeed is also a run-of-the-mill cell phone. 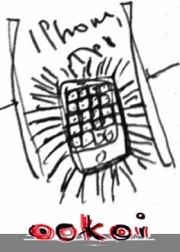 ookoi's iRingg® consists in a collection of 75 loopable sound-bites, in duration varying between 3 and 7 secs. The iRingg® files have been carefully selected and adapted from 1024, a collection of one thousand and twenty-four sound-bites (each of a duration of precisely seven seconds) that in turn were carefully selected and adapted from the ookoi's archived recordings of their live performances, roughly between the summers of 2004 and 2007. The 1024 piece (published as a DVD) roughly consists in the *no beginning, no end* serial playback of sound-bites randomly selected from the collection.
In the iRingg®, the 75 loop-able files are put to work as ringtones, randomly assigned to each one of the items on a user's contact list, which is a cellphone's very heart.

The development of ookoi's iRingg® for the iPhone seemed straightforward enough: the application would upon startup lead the user via a short animation to a cool designed _app screen, which would first allow the user to (i) save her standard ringtone configuration and (ii) randomly distribute ookoiRinggtones over her contacts. Later, the user will have the options to (i) restore her standard ringtone configuration or (ii) do a random re-distribution of the ookoiRinggtones. Utterly simple, utterly brilliant, the playback of ookoi's iRingg® would be determined by the order and the frequency with which a given user is called upon by her contacts ...

But our favorite iPhone developer quickly brought us back down to earth: "Nice idea," he told us, but "not feasible with the iPhone SDK. The problem is that the data from the built-in apps is off-limits for developers. Thus, no changing the ringtones..."